Item
100946
Price $300.00
Members $270.00
Optional Add-On Items
Overview
This mezuzah is part of a series from Mi Polin titled "Mezuzah from this house." Before World War II, Poland had 3.5 million Jewish inhabitants as well a few million mezuzot. Almost all of the Jews and their mezuzot perished during the war, with only traces and empty holes remaining today in the place of mezuzahs. "Mezuzah from this house" is a bronze cast of what is left behind and commemorates the Jewish lives of pre-war Poland. Each mezuzah has an engraved letter Shin and the address where the trace was found on the side. After sitting untouched for many years, these mezuzot can now fulfill their holy function again.
The story behind this mezuzah:
Many distinguished people lived in the tenement house at 14 Walicow Street before World War II. One of them was Dawid Szulman, a lawyer who was a member of the Jewish Military Union during the war. As a lawyer, he judged traitors and Jewish members of the Gestapo -- SS and Wehrmacht collaborators. Together with Berl Braudo and Sara Granatsztejn, he executed a dealth penalty for the director of the Judenrat economic department, Izrael Firszt, for collaborating with the Germans. All three of them were killed in the Holocaust.
Another famous inhabitant of the house was Wladyslaw Szlengel-- a poet, song, and cabaret writer. In 1941, he lived in the Warsaw ghetto and participated in theatrical performances in Janusz Korczak's Orphanage. He and his wife were shot dead by Germans in 1943.
Menachem Kipnis also lived there. He was a photographer, singer, satirist, and journalist. At the age of 16 he was a tenor in the Warsaw Opera choir. He and his wife, Zmira Zeligfeld, died in the Warsaw ghetto.
During the Warsaw Uprising, Walicow Street was the area for fighting battles by the Home Army "Sowinski" battalion. A particpant of these battles, Jerzy Wozniak "Szpila" reported: "On 24th September, the German infantry, supported by two tanks, attacked our positions at Walicow Street. The attack was preceded by the explosion of a huge bomb that destroyed the facade of the building at 14 Walicow Street. After heavy fighting, the attack was repulsed."
No proprietary claims regarding the building have ever been reported. The tenement house was partially inhabitated in the year 2000. In 2015, the city authorities issued the order for house to be demolished, but this was suspsended after intervention from the local authorities. In 2017, a group of municipal activitsts appealed to the conservator to register the house at 14 Walicow Street in the Polish National Registry of Historic Buildings. It is one of the very few tenement houses from the former ghetto area that survives to this very day, bearing witness to the history of Warsaw.
To see how the Mi Polin team discovers mezuzah traces throughout Poland, watch this video clip.
Cast bronze
Scroll sold separately 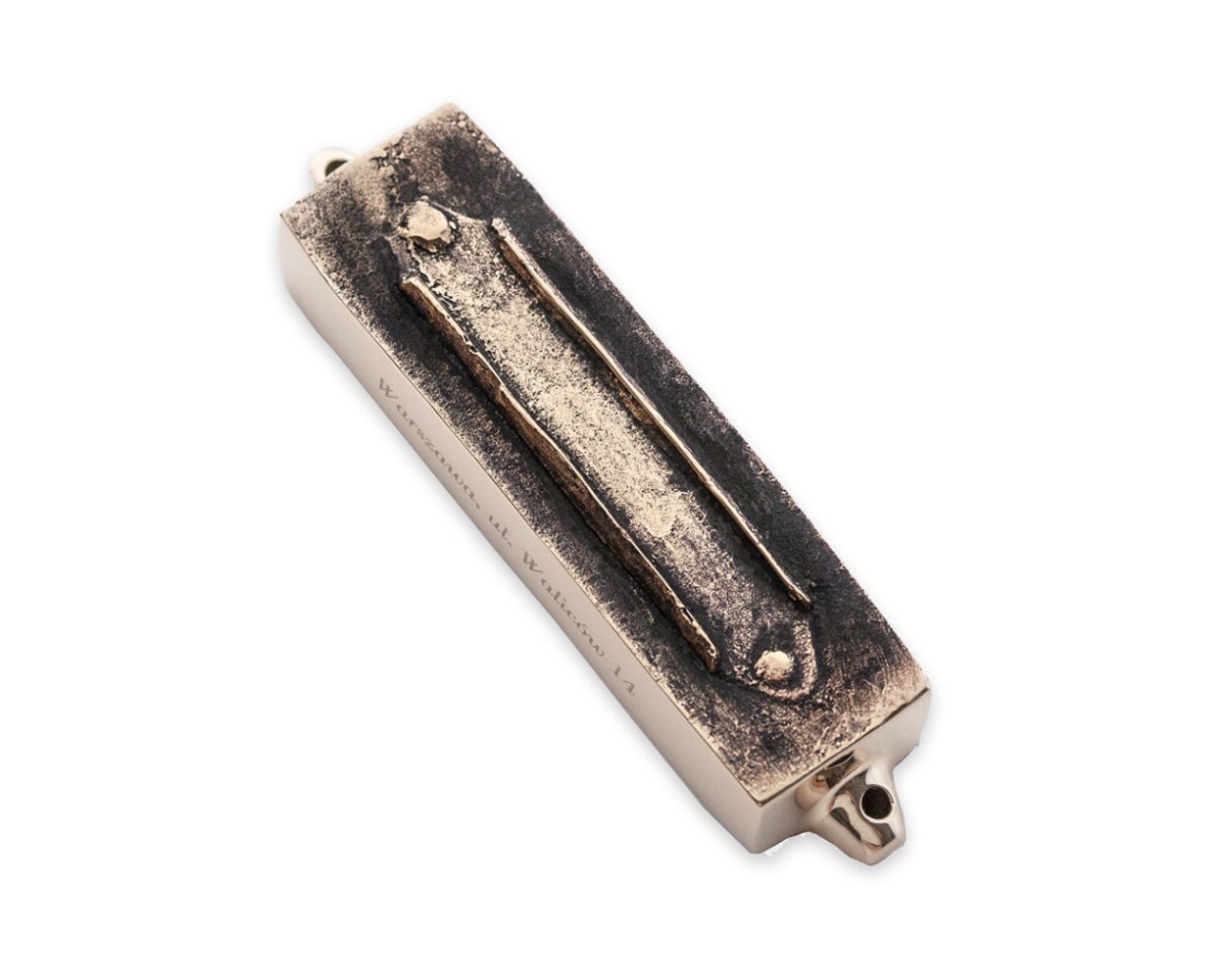